Journey to the Past

Westerford opened at the beginning of January 1953, housed in an old homestead which no longer exists. The site was originally known as Westervoort, but the school was known as Claremont Secondary School from the name of the school which shared a property with a small primary school on Dean Street. The pupils from Claremont Secondary School carried their desks to the new property at the end of 1952.

Noel Taylor, the first headmaster, began referring to the institution as Westerford Secondary School and in 1953 the Cape School Board recognised the name. 1957 saw the Founding class matriculate.

Continued development has seen a number of facilities open over the years including an indoor sports centre, seminar rooms, computer laboratories, swimming pool, Imhoff sports grounds, astroturf, the Jubilee Centre in 2013 celebrating 60 years of ‘Nothing but our best’ and in 2019 the Imbewu Music Centre.

The School currently has 900 pupils and has a fine reputation throughout the country for high levels of achievement in many spheres, most notably academically. Our dedicated, talented and experienced teachers stimulate all our pupils to achieve their best and as a result have developed an innovative programme at the school which has helped make us a leading South African institution. So much so, that in 2010 Westerford was approached by the WCED to offer academic support and management oversight to their new school, Claremont High School, which would deliver quality education to a diverse pupil body from less privileged backgrounds. 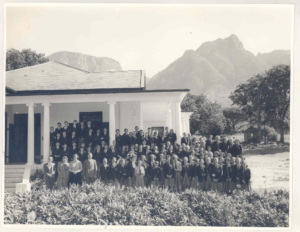 1957 school pupils in front of the Old Homestead 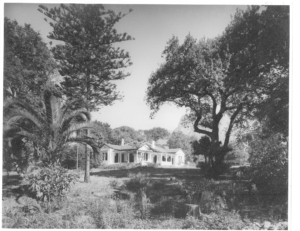 Side view of the Old Homestead from Mount Road